Over the autumn of 2017 the Greater Cambridge Partnership held the ‘Big Conversation’, seeking the views of people across the area on the area’s growth story – the current challenges faced and people’s ideas for the future.  At the time a number of people participated in a travel survey and we’ve had the chance to carry out a secondary analysis of this data and we’ve previously posted on what the results told us about cycling (The origin and destination data by postcode area will be published at the end of this series of data stories).

The basic methodology for the survey was to distribute a link to a web-survey on-line and via local employers, many of whom were involved in the ‘Travel for Cambridgeshire’ initiative.  In total, 7,635 responses were received from people who either lived or worked in the Greater Cambridge area.  This included a sub-set of 4,692 people who worked in Cambridge, the majority of whom provided their home and work postcodes and their regular commuting method.

Within this survey, the number of people saying they used a bus as their main mode for travel to work was relatively low (378, around 5% of all respondents). Total bus usage will be much higher than this number suggests overall though, National Bus Statistics confirm that only 1 in 5 bus journeys are made for the purpose of commuting to work (excluding London).

62% of those using buses to commute to work were women.  Also 66% of those travelling by bus to work were employed in junior or intermediate clerical or administrative roles.  The national level statistics confirm that this isn’t unexpected given the preference towards bus use for those on lower / intermediate incomes. 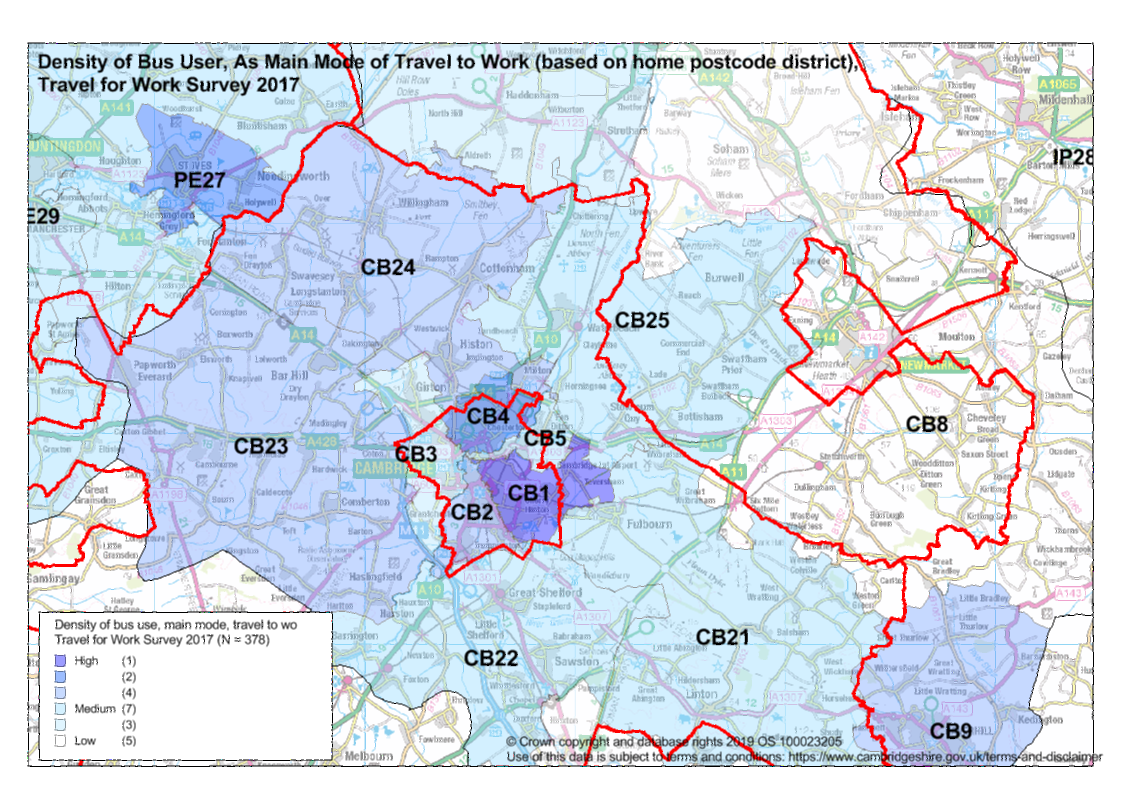 During 2017 the Greater Cambridge Partnership commissioned research amongst current users of the guided busway, talking to over one thousand people.  This study identified a similar balance between males and females (40% / 60%) and a 1 in 4 use of the busway for commuting (a higher proportion than nationally).

Most notably within the survey, whilst the mode share for travel to work by bus is at 5%- 8% for most of the postcode districts around Cambridge, for PE27 (St Ives) it was 35%. Clearly demonstrating the impact of the guided busway on travel choice.

This fits both the modelled figures of 41% to 43% for the combined mode share from all Park & Ride and Busway services if a Cambourne to Cambridge route was constructed. It also fits with the 35% of people (based on a 1000 respondent survey, St Neots to Madingley who said they were likely to use a new bus service if it was established along that corridor.

One word of caution that should be noted with the sample. The survey was distributed to a list of Cambridge based companies to forward to their employees.  This list did not include any employers (apart from Cambridge University) employing large numbers of people working in service, leisure and retail employment.