Data Story Series: What we know about cycling in and around Cambridge: Episode One

Cambridge is already the UK’s number one place for cycling, so the question must be asked, how far can the city go in encouraging more people to ‘get on their bike’ particularly for the commute to work?

To answer this, the team at Cambridgeshire Insight have recently completed a secondary analysis of travel to work data and it provides a strong indication that the Greater Cambridge Partnership’s investment in cycling could well return significant benefits.

Those familiar with cycle data will know that the 2011 census provided the current benchmark against which UK cities can be compared.  With Cambridge’s 29% of working residents cycling to work being a considerable margin ahead of Oxford (17%)  and certainly way ahead of most other UK cities which have cycle to work figures in single digits.  Cambridge also topped the table in Sport England’s 2015 active people survey with 33% of adults cycling three times a week. Great figures, but where is the scope to improve on this further?

Over the autumn of 2017 the Greater Cambridge Partnership held the ‘Big Conversation', seeking the views of people across the area on the area’s growth story – the current challenges faced and people’s ideas for the future.  At the time a number of people participated in a travel survey and we’ve had the chance to carry out a secondary analysis of this data and the findings for cyclists are remarkable (The origin and destination data by postcode area will be published at the end of this series of data stories).

The basic methodology for the survey was to distribute a link to a web-survey on-line and via local employers, many of whom were involved in the ‘Travel for Cambridgeshire’ initiative.  In total, 7,635 responses were received from people who either lived or worked in the Greater Cambridge area.  This included a sub-set of 4,692 people who worked in Cambridge, the majority of whom provided their home and work postcodes and their regular commuting method.

The first big headline is for the 1,784 people in the sample who both lived and worked in Cambridge.  A remarkable 62% of these said that they cycled as their usual method of getting to work.

Where sample size allows, we can also look at the detail of flows at a postcode sector level with the commuting flow by bicycle into the CB2 area from the rest of the City (the southern part of the City centre and area out to Trumpington) being as high as 73%.

So where is the room for further improvement?  Checking back with the Census briefly, Map One (below) shows the travel to work rates by bicycle for the settlements around the periphery of Cambridge. 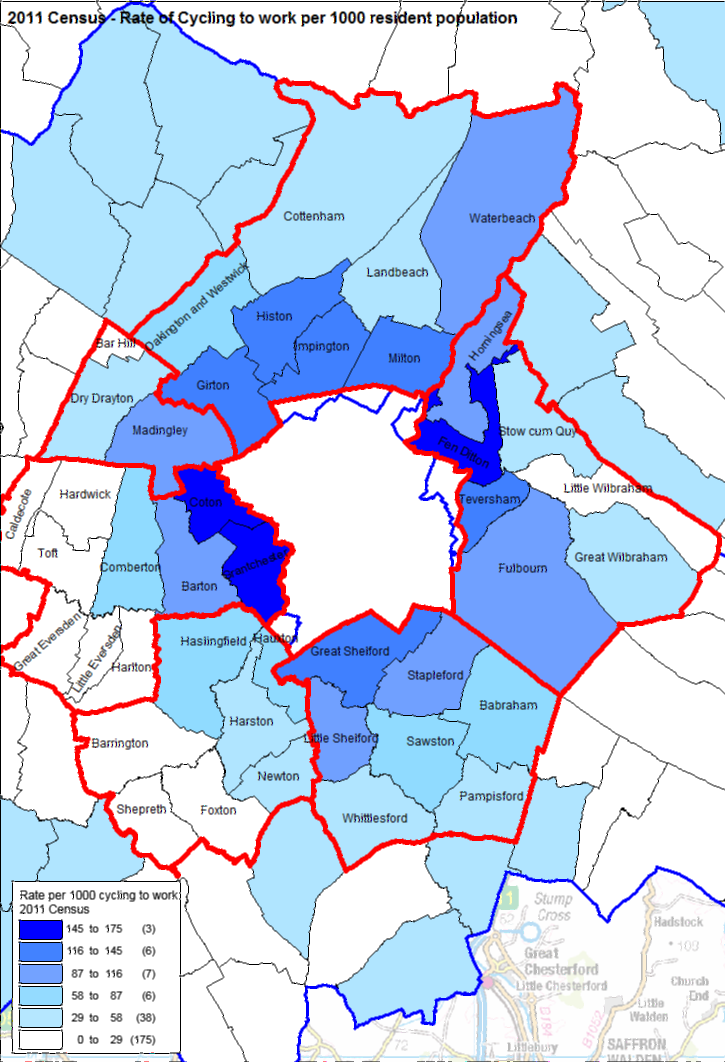 Whilst excellent in a UK context, the figures show the drop off from the 29% City wide figure is considerable.  Milton and Great Shelford, for example, fall into the 11.6% to 14.5% range.

Looking at the Travel Survey data from 2017, we can see that of all those travelling into the City to work 16% were doing so by bicycle. Unsurprisingly this group generally had a longer travel to work journey compared to those living in the City.  The gender split was different, only 35% of this group were female but the age profile (with 28% aged 50+) was similar.

So plenty of scope for the proposed Greenways Schemes to have an impact, particularly where the survey picked up near neighbours making parallel journeys (travelling to similar destinations), some travelling by bicycle whilst many more were still travelling by car.

As well as the potential for improving modal share, what was marked within the survey data was the radial nature of cycle journeys into Cambridge and the extent to which cycle journeys from beyond the City’s boundary feature relatively weak ‘cross-city’ movement.  A case in point is the in movement from Sawston / Shelford (see above).

Relatively few Cyclists were travelling South to North, into and then across the City to places like the northern science parks.  Similarly relative few were travelling in from Milton or Impington and across to the biomedical campus or the Addenbrookes site.  What will be fascinating to see is how the introduction of the Chisholm Trail will impact on this pattern, if the scheme works as intended, we’ll see the cross-city journey get considerably quicker and easier and cycling patterns change as a result.

The origin and destination data by postcode area will be published at the end of this series of data stories.