‘effective pupil place planning is a fundamental element of the local authority’s role as strategic commissioner of good school places.’1

Calculating the number of bums on seats or the number of classrooms needed now and in the future! These issues can only be addressed if you know how many pupils there are going to be.

This data story is the first in a series of posts that we will be publishing which look to breakdown the process of pupil forecasting in Cambridgeshire and highlighting the key datasets used throughout.

Local authorities are required to plan for school places. According to the government guidelines, ‘effective pupil place planning is a fundamental element of the local authority’s role as strategic commissioner of good school places.’1 It is under-pinned by strong use of relevant data drawn from a wide variety of sources that provide local pictures of increases in population due to births, expansions due to housing development, as well as changes resulting from people moving into and out of areas. Without the insight delivered by these forecasts into future demand on education within the county and where pinch-points on capacity may lie, Cambridgeshire County Council would be unable to effectively deliver their statutory duty to assess the local need for school places to ensure that every child can be provided with a place within a state-funded school.

What types of forecasts?

However, whilst there is general agreement that there is a requirement to forecast the need, there are a variety of methods available for doing this. The Cambridgeshire Research Group is commissioned to produce two types of forecasts:

• Pupil forecasts (school-based) are produced to show the numbers of pupils expected to enrol for individual schools and are based on historic enrolments and administrative data that helps predict the numbers of births and moves into school catchment areas. These forecasts provide insight into demands on schools and therefore are invaluable for future planning.

• Catchment area forecasts are produced to show the numbers of pupils expected to be living within each school catchment area irrespective of school attended. These forecasts are therefore not limited by school capacity and reflect how the pupil population is growing across the county, from a geographical perspective.

Below we see Cambridgeshire divided by secondary school catchment area. The catchment forecast essentially provided population insight into the number of secondary pupils living within each of these areas. A similar model is applied at primary catchment level for primary aged pupils too. These are generally geographically smaller areas than secondary catchments. 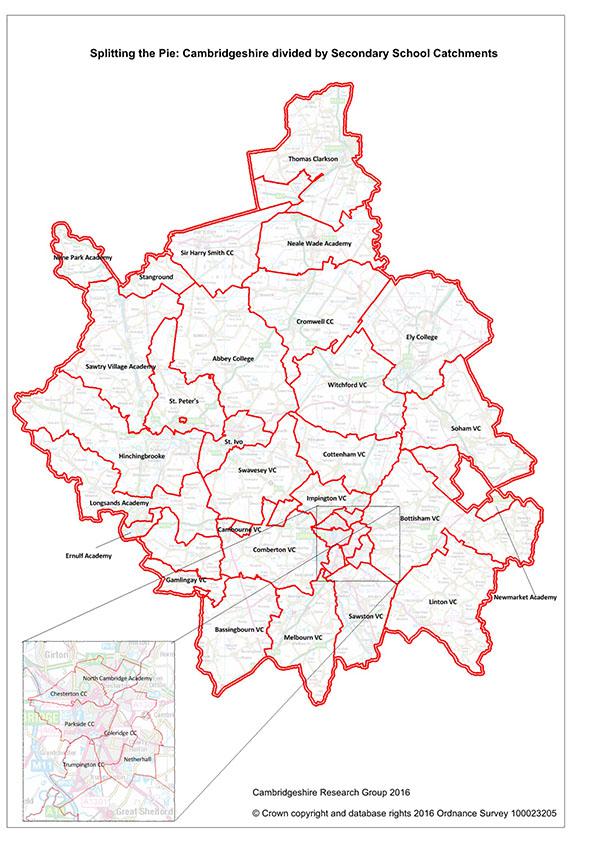 Local authorities are expected to demonstrate they have an effective method of forecasting pupil numbers, considering changes in local circumstances, to ensure that there is the right number of schools in the right places for the number of pupils expected in the future. A key dataset in driving these forecasts is the School Census.

The pupil and catchment forecasts use pupil counts from the January-based School Census, which is a survey of pupils that access education via one of the below:

• some schools not maintained by the local authority, including: academies.

The Secretary of State can share pupil-level data from National Pupil Database under strict terms and conditions with named bodies and third parties, who for the purpose of promoting the education or well-being of children in England, through the: conduct of research and analysis; production of statistics; or provision of information advice and guidance. The Schools Census therefore provides an invaluable source of evidence on those accessing education to inform independent research, as well as studies and reports commissioned by government departments, and plan for future provision of pupil places .

What wouldn’t we know without the Schools Census?

Without the school census, it would be difficult to forecast future demand on school capacity as we would not know exactly how many pupils attend each school, both currently and historically. The school census tells us exactly how many pupils are on roll within a school, by age group. We are able to use schools rolls to predict the number of year 7’s (age 11 pupils) arriving at each secondary school based on the historic rate of transfer between primary aged 10 year olds and secondary 11 year olds. We are also able to use the historic school census rolls to also identify trends in the movement of individual year groups within a school to identify whether year groups historically increase or decrease and cohorts move through the school. This can help to forecast whether future year groups will increase, or decrease, as they age through the school system.

Importantly, the school census also offers us key insight about where in and at times, out of the county that pupils on roll at our school are living.

• 98% of primary aged pupils on roll at a Cambridgeshire school are currently living in the county, while 0.7% come from Suffolk, 0.7% from Norfolk and 0.3% from Peterborough.

• The January 2016 School Census shows that 97% of the 32,285 secondary aged pupils (11 to 18 year olds) on roll at a Cambridgeshire school currently live in Cambridgeshire.

• Of the remaining secondary aged pupils, 1% are from Suffolk, 0.5% from Hertfordshire, 0.4% from Central Bedfordshire and 0.3% from Peterborough.

Our next data story will highlight what the forecast numbers for school rolls in the county are expected to look like from a county wide perspective between now and 2020/21.

The Cambridgeshire Research Group (CRG) produce a county wide forecast report that provides a local view of the forecast scenario for the future. This report is also broken down to show projections at individual district level. This report can be accessed by clicking here

If you have suggestions to make or want to find out more, please contactjamie.leeman@cambridgeshire.gov.uk