What do the school based forecasts tell us about predicted rolls in Cambridgeshire?

Forecasting pupil rolls can be tricky business but getting it right can be sweet.

Our first data story on school forecasting discussed how the school based forecasts help to offer insight into future demand for each school within the county. In order to plan provision strategically though, it is also important to look at how individual forecasts look from a county wide perspective. A countywide forecast report is produced each year and can be viewed here.

Data story 1 gave you some background to the pupil forecasting that we are doing here in Cambridgeshire but now we want to have a look about what the data within the school based forecasts aretelling us about predicted future rolls within the county. We did also discuss though how the school based forecasts are limited to the existing capacity of each school and is not always truly reflective of the overall pressures that may be placed on this capacity. The catchment based forecasts help here in that they are not restricted and forecasts the school age population living within a catchment area rather than the school rolls. The forecast numbers for the current Cambridgeshire catchment forecasts will be explored in our next data story.

Highlights of the school roll forecasts

The highlights of the forecast figures based on the January School Census currently predict:

• In five years’ time, total primary rolls are forecast to be around 4.0% higher than current numbers in the authority as a whole.

• For the LA as a whole, the number of reception age pupils is forecast to be very similar in five years’ time, with a slight decrease, due to a lower number of births.

• Primary rolls are currently forecast to be 0.5% lower in South Cambridgeshire in five years’ time. A lower level of growth has been seen here in recent years.

• Rolls are forecast to be 7.5% higher in Fenland and 7.3% higher in Cambridge City 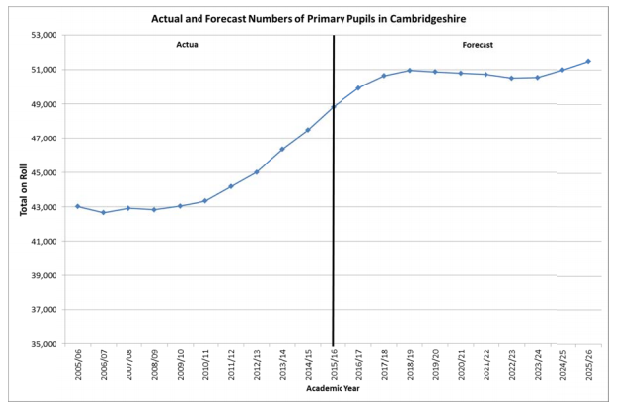 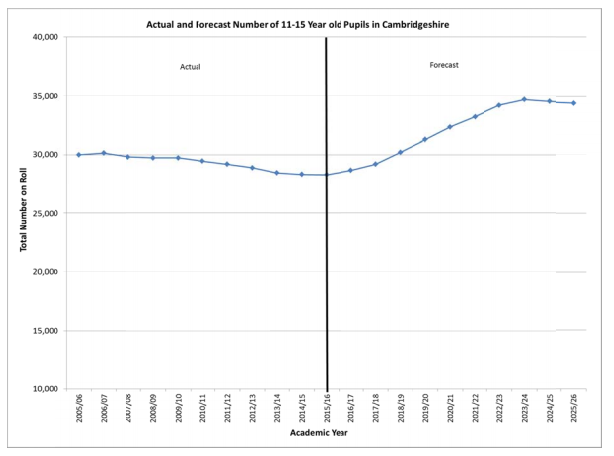 The Cambridgeshire Research Group produce a county wide forecast report that provides a local view of the forecast scenario for the future. This report is also broken down to show projections at individual district level. This report can be accessed by clicking here (https://cambridgeshireinsight.org.uk/wp-content/uploads/2017/08/Annual-Pupil-Projections-for-cambridgeshire.pdf)

If you have suggestions to make or want to find out more, please contact jamie.leeman@cambridgeshire.gov.uk